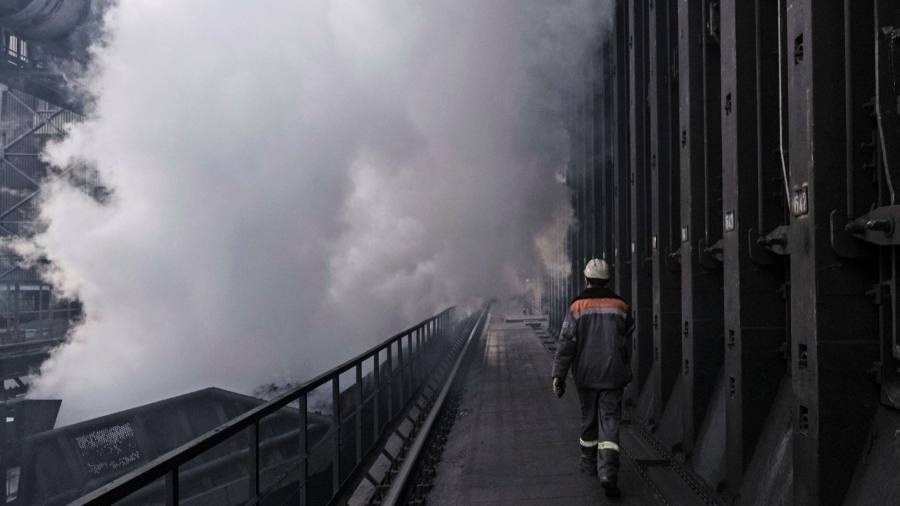 Good morning. This article is an on-site version of our FirstFT Europe/Africa newsletter. Sign up here to get the newsletter sent straight to your inbox every weekday morning.

European industrial groups have stepped up calls for the EU to hasten the introduction of a carbon border tax as record prices for CO2 allowances raise the cost of polluting in the bloc far above any other region.

Carbon prices in the EU’s flagship Emissions Trading System, a cornerstone of the bloc’s ambitious target to slash emissions 55 per cent by 2030, are within touching distance of €50 a tonne — more than double their pre-pandemic level.

While the rally has been welcomed by environmental groups and some companies as a potential boost for the clean-up of European power and manufacturing, it has left some industries wincing.

Tata Steel has placed a €12-a-tonne carbon surcharge on metal produced in Europe, including the UK. While it claimed it was necessary to cover its costs, the move risked disadvantaging the region’s production and exports.

Other industries, from cement to petrochemicals, have cautioned that the rally could starve them of funds to invest in decarbonisation.

Thanks to those who took our poll yesterday. Forty-seven per cent of respondents said they were not ready to return to the office — and forty six per cent were.

We must stop Covid-19 from shutting girls out of school forever, writes Malala Yousafzai. G7 leaders have to act — or students in low-income countries may never regain lost ground. Follow the latest on our live blog and sign up for our Coronavirus Business Update newsletter.

Facebook and Apple soar The social media group said prices for digital advertisements rocketed amid a boom in demand; first-quarter revenues increased 48 per cent to $26.1bn, beating expectations. Apple meanwhile posted double-digit growth in all its businesses, led by iPhone sales, which rose 66 per cent and accounted for 54 per cent of all revenues. For the latest tech industry news, sign up to our #techFT newsletter.

First woman to lead UK Big Four firm to depart Mary O’Connor is to leave KPMG after being passed over for the firm’s permanent chief executive role. O’Connor led KPMG UK for two months after Bill Michael stepped down as chair and chief executive in February. In a surprise, the board put forward Jon Holt, head of audit, to permanently take on the role.

Brussels vows tough rules on recovery spending The bloc insisted it is putting in place stringent processes to ensure its unprecedented €750bn recovery fund is not frittered away, amid mounting concerns about the potential for fraud and waste. Sign up here to receive the Europe Express newsletter, our essential guide to what happens in Europe.

Saudi crown prince seeks Iran rapprochement Mohammed bin Salman said in a Saudi television interview that Riyadh wanted to resolve its differences with Tehran to build a “good and positive relationship”, a marked shift in tone in the wake of Joe Biden’s election in the US.

Biden: America is ‘working again’ The president said the US was “rising anew” in his first speech as president to a joint session of Congress on Wednesday. He also announced a $1.8tn plan to expand the social safety net to be funded by tax increases on the wealthiest households. Biden’s first 100 days in office have been marked by a flurry of activity that has drawn comparisons to Franklin Roosevelt — but the better parallel might be Dwight Eisenhower. Republicans, meanwhile, have struggled to mount an opposition.

Ares raises €11bn private debt fund The US investment group has raised €11bn for a private debt fund that will be Europe’s largest of its type, as lightly regulated alternative lenders stepped up attempts to supplant traditional banks and bond markets.

Giuliani’s home and office searched Federal agents have searched the home and office of Rudy Giuliani, Donald Trump’s former personal lawyer, who has been under investigation by New York prosecutors for business dealings in Ukraine. Giuliani has denied any allegations of improper lobbying.

BMW suspends production The carmaker will halt production at its Regensburg plant in Germany on Thursday and Friday and will close its Mini facility in Oxford from Friday into next week because of the semiconductor shortage threatening the industry’s recovery.

Economic data The US and Sweden have first-quarter gross domestic product data out, as is US first-quarter consumer spending and initial jobless claims figures for the week ending April 23.

‘Like Boris, I’m haunted by John Lewis shame’ Following allegations, now under investigation, that the refurbishment of his Downing Street flat was funded by Conservative donors, Boris Johnson’s mission has become clear: to rescue the country from the “John Lewis nightmare”. Robert Shrimsley writes that he, too, will find a way to escape unacceptable taste.

Can Labour win back the lost heartlands? Since the creation of its seat in 1974, Hartlepool has never elected a non-Labour MP. But after the incumbent’s resignation, Hartlepool is now up for grabs. A by-election will demonstrate the extent to which the Conservative party has reinvented itself as a home for blue-­collar workers.

Wall Street beware: the SEC’s Gensler carries a big stick The last time Gary Gensler ran a US financial regulator, he was charged with cleaning up the mess after the 2008 crash. Now as chair of the Securities and Exchange Commission, he is under pressure to deflate any bubbles before they burst, writes Brooke Masters.

Post-Covid style: comfort in, status anxiety out After a year of wearing sneakers, jeans and shirts, all Gillian Tett can imagine buying are floppy, flowing clothes that are flexible and practical. Some designers think the feeling will spark a permanent move towards more comfortable styles.

Cartoon of the day

Thank you for reading. Send your recommendations and feedback to [email protected]

In Iraq’s ruined city of Mosul, pope hears of life under Islamic State By...

11 Classes We Discovered About Budgeting Throughout a Pandemic