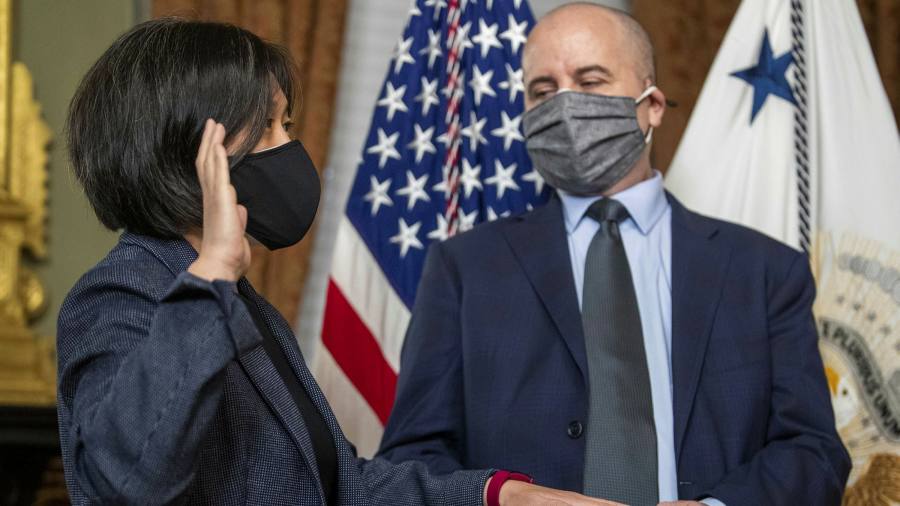 Hello from Washington DC, where I am delighted to report that it’s spring, and there is a confirmed US Trade Representative. It is, as the newly minted press office of USTR — complete with emoji-wielding Twitter accounts and a person who answers the phone — points out, important to note that Katherine Tai is the first Asian-American and the first woman of colour to hold the post after storming to victory via unanimous confirmation.

In fact, while we’re on that topic, USTR more broadly seems to have jolted awake from its time slumbering with the undead. Some government agencies — notably the Department of State and the Pentagon — typically send readouts to journalists on calls and meetings between US officials and overseas diplomats. They — and the White House — also send out daily guidance on what the principles had on that day. There has never been any of this from USTR — until now. We are being hit with a slew of readouts (and Tweets!) on Tai’s seemingly back-to-back calls with foreign trade ministers. We wonder if this signals a new and more transparent USTR?

Our main topic for today is the balance of power when it comes to trade policy in DC, while our Person in the News is the incoming secretary-general of the OECD, Mathias Cormann.

And for those of you interested in supply chains (very much the topic du jour given the amazing news of a ship getting stuck in the Suez Canal) the Financial Times has the first batch of a series of articles from a Special Report on the topic.

Don’t forget to click here if you’d like to receive Trade Secrets every Monday to Thursday. And we want to hear from you. Send any thoughts to [email protected] or email me at [email protected]

President Joe Biden’s new US Trade Representative Katherine Tai has launched into orbit this week following her unanimous confirmation by the US Senate, meaning the administration can finally get going on trade policy in earnest.

Tai’s previous position in unconfirmed limbo gave space for many in Washington, including diplomats, to wonder how powerful Biden’s USTR will be. This is not an unusual thing to wonder. It is, as Bill Reinsch of the Center for Strategic and International Studies points out, a longtime parlour game of Beltway baseball (or something, am I getting my US metaphors right?).

There are some interesting and some more trivial — but probably worth noting — points to be considered by anyone interested in the inside basketball of DC’s trade policy.

First up, the nature of USTRs. Briefly, some have not known much about trade and therefore not much gets done on their watch. We’ve written before on how Tai’s appointment signals that Biden has been persuaded to take trade seriously. It’s not a vanity appointment, the post-holder is qualified. Relatedly, it’s useful to look at Bob Lighthizer. He was widely considered a powerful USTR. Now, as when Donald Trump first came to power, diplomats are watching to see who holds most trade policy power — back then people weren’t sure if it was Lighthizer, Commerce secretary Wilbur Ross, or Trump’s wily adviser Peter Navarro. It emerged that it was Lighthizer — he was given a lot of latitude by Trump, they agreed on a lot of things, and Lighthizer ran with Trump’s obsession with trade deficits, and how they should be cured by trade deals (a mildly contentious take, as Trade Secrets readers will know, most economists think trade deficits reflect savings, investments and capital flows).

Second, boring bureaucratic stuff. The current administration will work differently. There will be a return to a more traditional inter-agency process, which involves the National Security Council, the foreign policy shop within the White House, co-ordinating the various international and diplomatic policies of agencies such as the state department, commerce department (which has power over some tariffs and duties, as well as power over export controls), USTR and the Treasury (which controls sanctions). There couldn’t be a USTR as powerful as Lighthizer within this system, which involves reporting and evaluations and feedback and meetings and reviews.

Third, there is a reframing of the way in which trade is viewed. The common narrative is that trade will become boring under Biden. A more interesting narrative is that it is, in fact, likely to become more important. That is because there’s a reframing of both domestic and international economics as important foreign policy issues, and therefore a new focus on trade policy within the NSC.

Early last year, Biden’s top national security adviser (and de facto boss of the NSC) Jake Sullivan co-wrote an article in Foreign Policy with another NSC hire, Jennifer Harris in which they argued that foreign policy folks had for too long outsourced questions on international economics to a small cadre of experts in that field. This, they argued, explained why the Obama and Bush administrations had different domestic economic policies but similar international economic policies (that is, support for TPP).

They outlined some suggestions for new trade and trade-related policies — there should be more aggressive targeting of tax havens to capture the gains of trade, there should be better bulwarks against currency manipulation in trade deals, and there should be an international antitrust strategy to stop Chinese behemoths crushing US titans who are made to adhere to US antitrust laws. There’s also broad support for the idea of an industrial policy that would help key US industries compete with China.

Arguably, the policy establishment’s continued preference for a trade policy that worked for ordinary wage-earners in the US domestic economy occurred somewhere in the Trump administration. But what we now have, seemingly, is an NSC that sees trade as critical, and is interested in trade.

Does this mean the role of the USTR is diminished? Some fear that old-time Biden aide Jake Sullivan will be calling a lot of the shots. Tony Blinken, the secretary of state, could also be influential if trade is now seen more clearly through the lens of foreign policy. And there is also now the supply chain review being carried out by NSC and National Economic Council folks.

But longtime trade watchers in DC argue that Tai has irreplaceable experience — actual knowledge of trade, which is a thorny and sometimes intricate subject that rests on a web of domestic rules and international treaties. There was a reason international economics was left to the experts in that field. She also has an unsurpassable sense of what can and cannot pass through Congress when it comes to trade.

For sure, the top two issues on Tai’s books — and probably primarily Tai’s books — will be WTO reform and sorting out Airbus/Boeing. On the latter, USTR has been making clear to European allies that it means business. In Tai’s absence, it has already been working hard on the issue under the auspices of her chief of staff, we’re told.

So for now, as we sit back and admire the readouts we reporters now unexpectedly receive detailing Tai’s calls with other trade diplomats, we would guess USTR will continue to be a surprisingly powerful force in the US government, albeit as part of the larger machine. Biden says trade deals won’t be his priority — but it looks like there’s plenty else to do.

News of the Ever Given container ship becoming wedged in the Suez Canal could not come at a worse time for exporters, who are already suffering from soaring shipping costs. Here’s what has happened on the East Asia to Northern Europe route.

The canal is a main artery for trade, with a maximum of about 75 vessels using it a day. Avoiding it would involve a trip around the Cape of Good Hope, adding about a week on to the time it would take ships to reach European ports.

All eyes now are on how long it takes to budge the ship, which is almost as long as the Empire State Building is tall.

Person in the news

Mathias Cormann, the incoming secretary-general of the OECD, told the FT that he was confident the body could help secure a global multinational tax deal.

An inability to strike a digital tax deal has created a big problem for the OECD. The former Australian finance minister will take over from Angel Gurría as secretary-general of the international organisation in June, and will immediately be thrown into the fray of a tax disagreement that threatens to erupt into a trade war.

However, sounding optimistic, Cormann said it was in companies’ interests “to be able to deal with one consistent international set of rules, rather than to have to deal with the proliferation of different unilateral measures”.

Sense and sensibility will prevail, he said. Let’s hope so.

Stock futures are flat in overnight trading ahead of jobs data